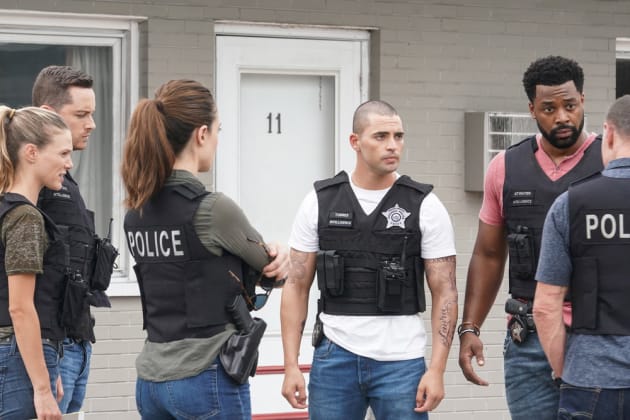 
No one can say that wasn’t an emotionally wrought hour.


When Chicago P.D. gives, it also takes away, which seemed to be the case on Chicago PD Season 10 Episode 2 where Upstead has disintegrated in front of our eyes while Burzek has taken a long overdue leap.


The hour set up Halstead’s exit from the series challenged Ruzek’s temperament and growth, and had a heartbreaking loss of an innocent child.


Torres’ official first as part of the unit was understated, but he did well in the environment and was valuable throughout the case.


A girl would still love to know if he has any other shirts in his closets, but that’s beside the point. He paired up a great deal with Atwater, and in Halstead’s absence, that would be a strong dynamic if explored more.


Ruzek can’t seem to go anywhere without getting sucked into a case. His time on the stand should have been easy, but the defense made it seem like Ruzek was this rogue, dirty cop who got Wilkin put behind bars wrongfully.


On the one hand, it’s not surprising that Ruzek has 17 complaint files. And it’s not outside the realm of possibility that he could’ve planted a weapon. He’s always played it a bit fast and loose with the rules.


But he didn’t. And he got testy when Burgess’ attempt to give him some support backfired on her.


Burgess has assumed the worst about Ruzek for so long that it isn’t surprising that he couldn’t take her comfort for what it was. She meant well, but she’s been so consistently critical of him that he’s on the defense whenever she mentions certain things.


She succeeds in getting into his head too. She had him doubt himself and question his judgment over whether or not they saw a gun in Hawk’s house, which was painful.


Of course, Tiana got under his skin as well.


The case must’ve been pulled from the real-life incident of the correction officer who helped her prison lover escape. It’s madness that Tiana risked her job and everything else to be with Wilkin.


The revelation that she helped him was crazy, and the team was on the hunt for this cop killer for the rest of the hour. The most gut-wrenching moment of the hour was when Wilkin shot a kid.


Parenthood has changed how Burzek carries themself on the job, and this was no exception. Patrick Flueger gave us a strong, heartfelt performance. His moments with the young girl were heartwrenching.


He did everything from telling her about his little girl at home to pulling out a miniature horse Makayla gave him to keep the young girl alert. But a bullet to the bullet meant the girl didn’t have a chance.

She’s a peace officer shacking up with a convicted murderer. I can’t believe how blind people can be sometimes.


What is with this show and killing off kids? It’s the second time since the return that they’ve done that.


Ruzek showed real restraint while in that interrogation room with Tiana. Her insistence that Ruzek was the bad guy when Wilkin shot a 10-year-old was outrageous. How she got to the point where she put that much faith in a prisoner is beyond me.


When she started implying that Ruzek was putting on a show with pictures and his blood everywhere, I wanted to reach through the screen and smack her.


Only when she found out he was seducing other women for his benefit did she give him up.


Everything leading up to the shootout at the train station was intense. And Kim absolutely dominated with her badassery. Her succeeding in killing Wilkin while he was in that bathroom saved so many lives.


It’s nothing like a harrowing case that brings characters together. Finally, they provided us with an answer about Burzek.


Burgess must have given Ruzek a “have your cake and eat it too” option. They were still sharing custody of Mack, and she held off on moving in with him under the guise of stability.


But Adam had been building a home for them there, in limbo while she figured things out. His determination to make Mack that bird house was precious.


Adam is such a dad now, and she has him wrapped around her finger.


After the case and seeing that sweet, beautiful girl, who likely reminded them of Mack, die in front of their eyes pushed them in the right direction.


They were long overdue to clear the air, and Burgess owed Ruzek that apology for making him feel like she didn’t believe him and implying that he didn’t provide Mack with the stability she needed.


It was quite the opposite. But I’m so glad they will be the family they were meant to be, and Kim and Makayla are moving into the house with him. It’s a fixer-upper, but they can do that together.

I was wrong. You’ve proven yourself time and time again. You’re stable with her. I believe in you, Adam. I do. And I’m sorry if it hasn’t always felt that way.


It set things right. The final scene was sweet, and even if it didn’t mean they were romantically together, it didn’t matter because their family is intact on the right path.


They gave us the Burzek that we deserved, to a degree, but what’s with the notion that we can’t have both couples in a good place at the same time?


Hailey and Jay’s scenes together were downright uncomfortable. Something has changed between them, and despite Hailey’s best efforts, they haven’t discussed what the issues are.


It doesn’t bode well that Jay has been blowing her off, dismissing her, and avoiding her. Something is broken between them, and it feels like Halstead’s exit, presumably in the next installment, won’t have a happy ending for Upstead.


The hour attempted to sell on the notion that Halstead was getting too dark because of Voight. Hailey spent the entire hour expressing her concern about Halstead and trying to rein him in.


She didn’t like that he was okay with certain things and on the cusp of becoming like Voight. It’s such a quick turnaround for this character that one can understand how it feels out of character for him to do a 180 so abruptly.


It has Hailey confused, and likely some of the fans as well.


The secrecy surrounding Halstead and Voight only made things worse for her. She was thrown by Jay not communicating with her at all. But in some regard, she was entitled to the information.


It was weird that Will, bound by HIPPA, would tell Hailey anything about why Voight showed up at the hospital and what transpired.


Voight’s popped stitch wasn’t really any of her business, so the draw of boundaries is something new that she can’t adjust to these days.


But Hailey isn’t wrong when she says that they aren’t themselves right now. Jay roughing up people or making dicey calls; none of that is what she expects from him.


It goes back to her fear that working with Voight changes Halstead. I can see the angle they’re going for here.


But it was generally odd to watch their portion of the hour unfold before our eyes because we’re cognizant of what they’re trying to do by leading us to how Halstead exits, but it’s just odd.


It doesn’t feel particularly thought out, which means his exit will be a controversial move, I’m sure.


We don’t have a lot of time left with Halstead, and it feels like the undoing of Upstead and some odd moves for Jay.


Over to you, Chicago PD Fanatics. Sound off below.


You can watch Chicago PD online here via TV Fanatic.